A Time to Sow. A Time to Reap

Working outside, watching things grow - whether it is the grass on the golf course or the people that I work with are a few of the benefits of being a golf course superintendent.  For many superintendents there are other benefits.  Being able to take your dog to work is a hidden benefit.  For the past nine year I have fully reaped those benefits.
But as superintendents we also deal with the laws of nature - biology, chemistry and physics.  Superintendents challenge nature but we understand that nature always wins.   We understand that everything has its time.   There is a time to sow - There is a time to reap.
For me, May 21st was one of those days.  The forces of nature caught up to my dog and best friend Mickey. 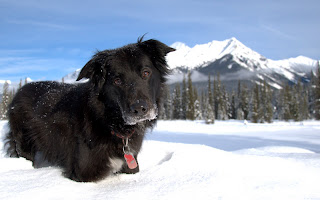 He was three weeks short of 15 years old and led a long life.  He had been with me for nine years and had three owners.  All of whom loved and cared for him deeply, none more so than myself.   I was introduced to him at the Pinebrook Golf and Country Club by Tania and her family.  The decision to take Mickey took seconds when Tania asked if I wanted him.   He moved to the Golden Golf and Country Club with me in 2003, where he began the life as a golf course dog.  He went to work with me every day and was often there when I was not in attendance.   He moved with me to Greywolf in 2007.   He was the only sticking point when I took the job at Greywolf.   We were a package deal and I would not have left Golden if he could not join me on the course at Greywolf.   I thank Peter for hiring us and my fellow managers and the owners for accepting us.
Mickey was always by my side whether riding in my cart, in the Snowcat, or just walking around and inspecting the golf course.  He was trained not to walk on the greens, tees, fairways or in the bunkers.  Not for any particular reason.  He was just that smart.  His life can be summarized by chasing thousands of balls and fetching millions of sticks.  He chased every wild animal we met.  Deer, elk, moose, bears, skunks, and squirrels.  He lost all three encounters with the skunks.   When he came across a porcupine while hiking Mt. Gorman, he knew enough to stay away.  I thank him for that.  The encounters with the skunks are also forgiven.   Squirrels were his nemesis.  He stopped 100% of the deadly squirrel attacks that we encountered.  He was the toughest dog in the world if he could see the ass of whatever he was chasing.  If he could see the teeth of the challenger, his courage quickly faded. 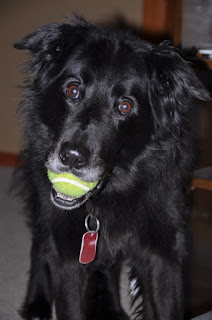 Members and guest knew his name better than my own.  I do not blame them – he was smarter, better looking, and better behaved.  I will now be known as the guy, rather than the guy with the dog by many guests.
He has been through every aspect of a superintendent’s life and my life.  He has been a part of nine golf course crews.  He stopped one burglary.  He was older than nearly all of my nieces and nephews.  He has seen friends and family move on and depart.  He has attended staff functions and seen the tough days of a superintendent---greens dying, staff leaving, and the never ending challenges of mother-nature.  At the end of those days all he wanted was a tennis ball.  In 2009 he broke his leg and I carried him up and down stairs for a month as he healed.  I would have done it for longer if needed.
Mickey saw the morning fog part on the golf course and the sun rise over Mt. Paradise.  He saw the view of a thousand peaks at the top of Panorama and sat with me when as the fire went out and the sun set over the peaks of Monument mountain.   Good times and bad he has been by my side. 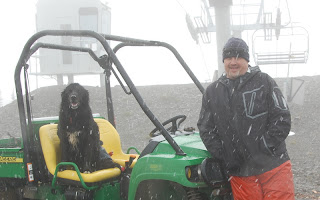 On Saturday May 21st we went for one last trip around the golf course.  At the end of the work day he told me it was time.  The cancer had advanced too far.  He gave me six months I did not know we had.   With the help of our vet, I put Mickey down.  It was quick, painless, and humane.  It was also very difficult.  When he returns from the crematorium he will move to his final resting place on the golf course.  He will always be a part of the golf course.
To all those who have been part of his life and helped me look after him I thank you.
To all the friends, staff, members and guests who have written me notes and stopped me to offer there condolences - thank you.
I look for him daily.  I am inexplicably thankful for having him in my life and I miss him.
The forces of nature stop for no one.
There is a time to sow.  There is a time to reap.
Posted by Darren Reddekopp at 8:45 PM

Greywolf Golf Course is an 18 hole resort facility located at Panorama Mountain Village - 18 km west of Invermere British Columbia, Canada. Greywolf covers 220 acres located in the Purcell Mountains. The golf course is comprised of 38 acres of bentgass greens (A4), tees (Penn Eagle), and fairways (Penn Link), at between 3600 and 4100 feet of elevation. It is consistently ranked as one of Canada's best golf courses and is known as "Canada's truest mountain golf experiences"

Darren Reddekopp
I got into the golf course business by working at my home town golf course to put myself through university. My home town golf course, the Acme Golf and Country Club, was a small nine hole golf club that had sand greens. Not sand based greens but sand greens (search sand greens in Google). I obtained my Bachelor of Commerce from the University of Calgary and was faced with the choice of working in an office or going back to school to obtain my Turf Management Diploma. Needless to say I took the latter route and have now been in the golf maintenance business for 21 years. I am currently the Superintendent at the Greywolf Golf Course at Panorama Mountain Resort.